Anytime you're around thousands of people, using the same handrails, walking around likely dehydrated... your immune system is being challenged.

One day (several years ago), I stood outside an Apple store in a mall, and became nauseated watching dozens of people at a time touch the same stuff over and over. And it happens all day, every day.

Then you have all of those booger pickin snot-nosed kids touching everything. The place is a Petri Dish and is ground zero for the pandemic that will end all life on this earth.

I got my virus from a girl.

HecticArt said:
The place has to be filthier than an airplane drink tray.
Click to expand...

memebag said:
I got my virus from a girl.
Click to expand...

Crabs are not a virus.

memebag said:
Crabs are not a virus.
Click to expand...

Sorry, my daughter the biologist is not here right now to consult with.

Where are the cast members with the 55 gallon drums of hand sanitizer?

Here is news of a Moana: Journey Of Water attraction. "You're welcome!" JHDK will be able to keep us updated on construction.

I demand equal time for Disneyland!

Teen with measles visited Disneyland, and O.C. officials are warning of exposure

Galaxy's Edge opens in Disney World today. I am definitely interested in seeing it in person but won't try it if I go to Disney tomorrow. Not looking to fight those crowds. Even if it winds up as empty as the one in Disneyland (which I seriously doubt will happen for various reasons) it will still be packed for the first couple weeks. Hopefully it means lighter crowds in the other parks for a little while. Also the hurricane bearing down on us might help clear out some of the riff raff.
Reactions: HecticArt

Is that sponsored by Samsung?

JHDK said:
the hurricane bearing down on us might help clear out some of the riff raff.
Click to expand...

So the riff-raff are the ones who don't go during a hurricane?
Reactions: HecticArt

scotchandcigar said:
s that sponsored by Samsung?
Click to expand...


scotchandcigar said:
So the riff-raff are the ones who don't go during a hurricane?
Click to expand...

Ha! I guess an argument could be made that whenever I'm there, so is the riff raff.

Pretty neat leaked photo from inside the Rise of the Resistance ride that will open at the end of the year: 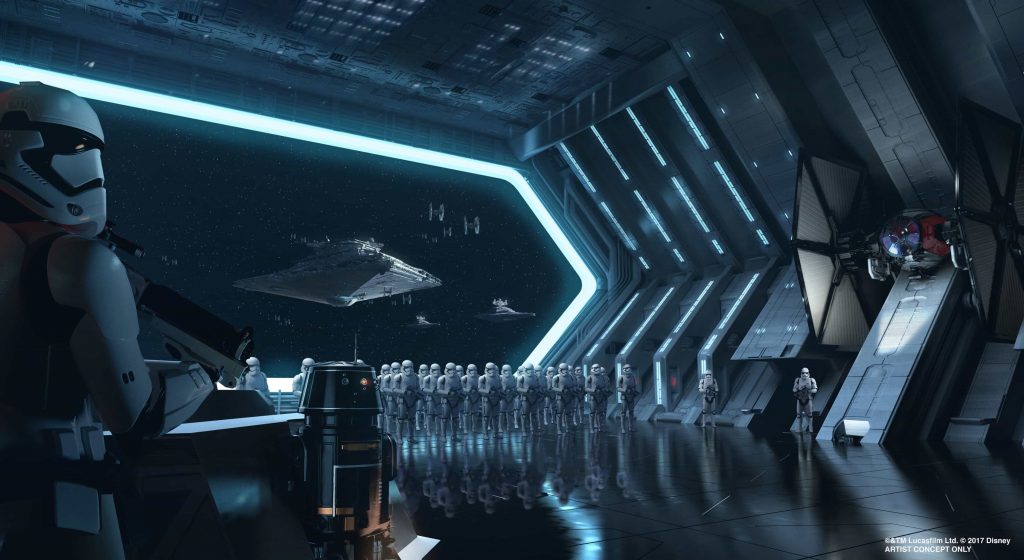 Here is what it will look like when it's done:

And here is a fun video they just aired at the D23 Expo about it:


Fun note, the ride is opening first at Disney World even though the one in Disneyland begun construction well before it. Rumor has it that the trackless ride system had issues in CA that they had to work out before they could keep going. Once construction began in FL they already knew what to expect so they didn't run into the same issue again.
Reactions: HecticArt and Aaron

So I stopped by my aunt and uncle's this morning to talk budget...I may or may not talk about that later in the Koopland thread...I'm still deciding how honest I want to be. Since I was already in Melbourne I decided to hop over to Disney. It was a quick trip. I went to Hollywood Studios to check out Star Wars Land. It's pretty cool. The mountain theme isn't nearly as impressive as Avatar Land but the life size Millennium Falcon is truly impressive. All the Star Wars ships they have are really cool. I did the Smugglers Run ride and it's fun. It's not breathtaking like the first time I did Flight of Passage (once again in Avatar Land) but it's cool. It's a better, modern version of Star Tours.

I had read that you control how well it goes depending on the buttons you push in-ride. They tried something like this with Mission: Space in EPCOT, where they tell you to push buttons during the ride but they don't matter, it's the same ride no matter what you do. With this one it really changes how well you do in the ride. I went in hoping to do as bad as possible to see what would happen but I didn't expect that to happen cause as a single rider I wouldn't want to ruin it for whatever family or other group I get paired with. However, I got a family that didn't speak English so they had no idea they were being told to press buttons. I purposely pressed the wrong buttons. Turns out you bang into a bunch of pillars and mountains and stuff if you do a poor job. Also the goal is to get some fuel or whatever to sell and when you screw up you wind up with very little money in profits from your fuel sale. Another cool thing is that the employee kinda chides you on the way out when you screw up. He said something like, "What did you do to my ship?" when the ride was over. The ride itself lasts about 6 minutes, a solid ride-time.

It really looks like the cockpit of the Falcon.

Oh and I went through the shop area. It's kinda like an open air, one floor mall/market but the Star Wars theme in it is amazing.

I can't wait until the main attraction, Rise of the Resistance, opens in December. From all I've read and saw about it, it will be yet another example of how Disney can make the best rides in any park in the world.
Last edited: Sep 9, 2019
Reactions: HecticArt, scotchandcigar and Aaron