You are using an out of date browser. It may not display this or other websites correctly.
You should upgrade or use an alternative browser.
J

Not a complaint or anything, but I think the Twitter account could do a lot better at advertising the site. Maybe that will help drive traffic a little.

It's generally the mods.
Send me and Aaron a PM with your thoughts and we can chat.

I've got some ideas I can bounce off the both of you, maybe this weekend once I have some time. New job's kicking my ass.
Reactions: HecticArt
J

I should have something mildly coherent typed up by this weekend, just busy.
Reactions: HecticArt
J

I don't think a PM will be necessary, I'll just post it here.

I'll just say the Twitter account has been under-utilized in the promotion of this board. Countdowns are great, but there's a lot more to this place that should be promoted. Who Am I, Theme Songs, The user music threads, the Fantasy Leagues (our NFL league is still sitting at 9 teams), plus you could use it to live tweet certain events on Satellite radio (I don't have satellite, and likely never will so I won't be involved there). There are also several apps like Crowdfire that you could use to promote the Twitter account, which in turn promotes the board.

I think I've been on some form of this site (DRC and SBS) for a decade now, and would like to see it continue.

And I'm still not a big fan of the current forum theme. The brown does nothing for me. I'd rather see bright colors, lighter themes, and yes, even a dark/black theme, at least more variety than what's available now. And more 'toys' on the forum like a portal, with actual birthday listings. Create something that will want to keep people coming back beyond the usual cast of regulars.
Reactions: WolFyre

and don't forget to mention Avatar Theme Weeks and my game Entertainment Trivia?

I don't have those numbers at the bottom of each post

Nothing next to the Like, Quote, and Reply?
It should be the sequential number of each post in the thread.

Ahhhhhh, telephone.
I'll see if there's anything for that.
Reactions: semipenguin

HecticArt said:
Ahhhhhh, telephone.
I'll see if there's anything for that.
Click to expand...

I swear, I think there used to be a share via Chrome mobile

Tapatalk has a share. If you highlight the post then click the three little dots in the upper right corner, it gives you the share options. I don't have twitter on my phone though, so I'm not sure how/if it works.
J

This is what iOS Tapatalk has. 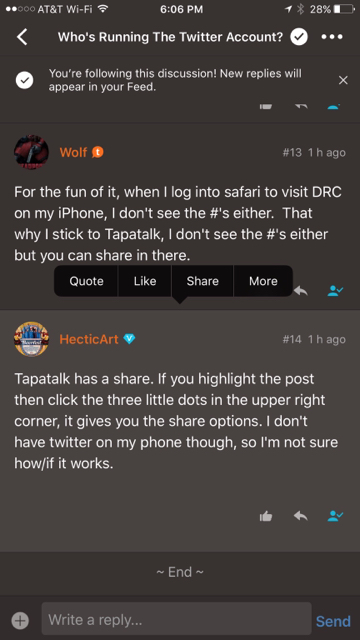 Sent from my iPhone 6S Plus using Tapatalk
Reactions: semipenguin

Jon said:
This is what iOS Tapatalk has.

Sent from my iPhone 6S Plus using Tapatalk
Click to expand...

How do you have a darker theme on Tapatalk?
J

Dark mode, it's in the settings.

Jon said:
Dark mode, it's in the settings.
Click to expand...

I see it, it called "Night Reading Mode"
J

Jon said:
This is what iOS Tapatalk has.

Sent from my iPhone 6S Plus using Tapatalk
Click to expand...